London: The skies are alive again with…planes and vapour trails!

With the British air space being reopened last night for flying after six days, the skies over London roared back to life today, 21 April 2010. It was the first full day of flight operations since the airborne ash from Eyjaffjalljokull (a glacial volcano in Iceland) triggered the first ever shut down of air space over Britain – and later several other countries in western Europe.

Stranded with tens of thousands of other air travellers in London, I’ve been watching the situation unfold and following the debate between airlines, British Met Office and the aviation regulator (which ordered the shut down on safety grounds on April 16).

London (and much of Britain) rolled out near-perfect Spring weather in the past few days — clear blue skies and warm, sunny days. But one thing was conspicuously missing: no aeroplanes flying overhead, and no vapour trails drawing temporary lines in the sky.

Contrails (“condensation trails”) or vapour trails are artificial ‘clouds’ made by condensed water from the exhaust of aircraft engines. As the hot exhaust gases cool in the surrounding air, they sometimes (but not always) produce a ‘cloud’ of microscopic water droplets.

Today, the planes and their vapour trails were back in abundance. It looked almost as if the trails were the airline industry’s way of sticking their tongue out at the aviation regulator, who is now under immense public and media pressure over its conduct in this incident.

The Evening Standard today ran its front page photo of Andrew Haines, head of the British Civil Aviation Authority whose decision is estimated to have caused losses totalling over one billion Pounds to travel industry and others dependent on air travel services. Their headline: “The man who shut the skies: Aviation chief accused of flights ban blunder”

That debate will rage on for many days to come. Meanwhile, I’m hoping I can fly back home, belatedly yet soon. While waiting to hear that news, I walked around Central London today clicking images of life on the ground and vapour trails across the lovely blue skies. Here are a few — taken in Leicester Square, Convent Garden, Paddington and Hyde Park. 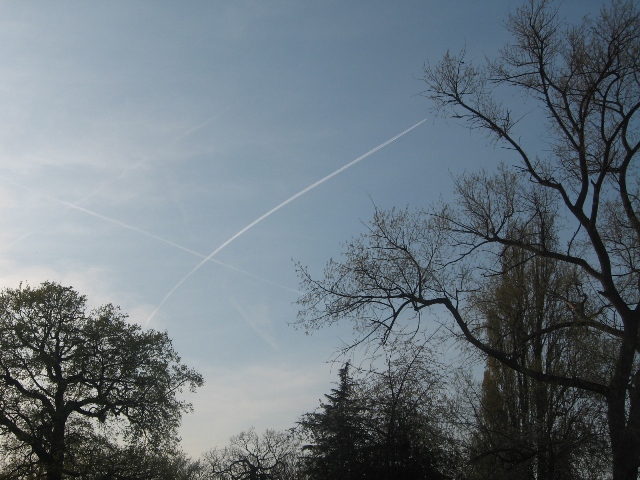