“Twenty centuries ago, Emperor Nero fiddled while Rome burned. Today, some media companies are squabbling over copyrights while the planet is warming.”

These words, which I first uttered during an Asian workshop on moving images and changing climate in Tokyo in early October 2008, have resonated with many journalists, producers and activists concerned about climate change.

The latest outlet to carry my views is Down to Earth, the fortnightly magazine on science and environment published from New Delhi, India. They have included a condensed version of my remarks in their issue for 15 December 2008, under the heading: Films chained, unchained

It’s part of a special issue to mark the 14th Conference of Parties to the United Nations Framework Convention on Climate Change (UNFCCC) and the fourth meeting of Parties to the Kyoto Protocol, being held in the Polish city of Poznan from 1 to 12 December 2008.

In fact, Down to Earth editor Pradip Saha was part of our Tokyo workshop which called for climate change to be recognised as a copyright free zone.

When Down to Earth editors first mooted the idea of carrying my views, they suggested a catchy headline: Climate’s Niros. I rather liked that…but that didn’t survive their copyediting. Ah, well… 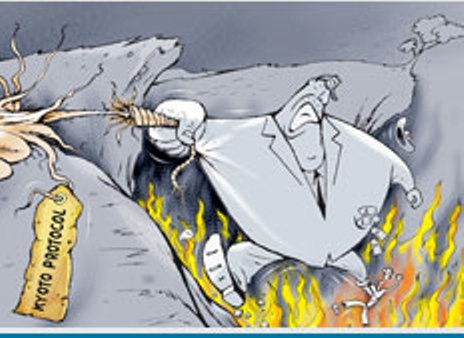 In its preamble to the special climate change issue, Down to Earth editors say:
“Eleven years after the Kyoto Protocol was signed — only to be consigned to irrelevance over the subsequent decade — nations are meeting in Poland to negotiate post-2012 action.

“The realities of climate change are clearer than ever, and the cost of action is mounting. Rich countries, historically responsible for climate change, are proposing new mechanisms to share the burden. Leading developing countries such as India and China need to negotiate hard as well and make a big push for renewables…” Read full story

On 7 November 2008, Asia Media Forum published a longer version of this essay:
Climate Change or (c)limate (c)hange: Guarding copyrights on a warming planet

These have been linked to, or commented upon, by various blogs and websites. Interestingly, the big time TV/video production companies and broadcasters have been keeping quiet in this debate.

Perhaps they are too busy counting their money accruing from license fees?